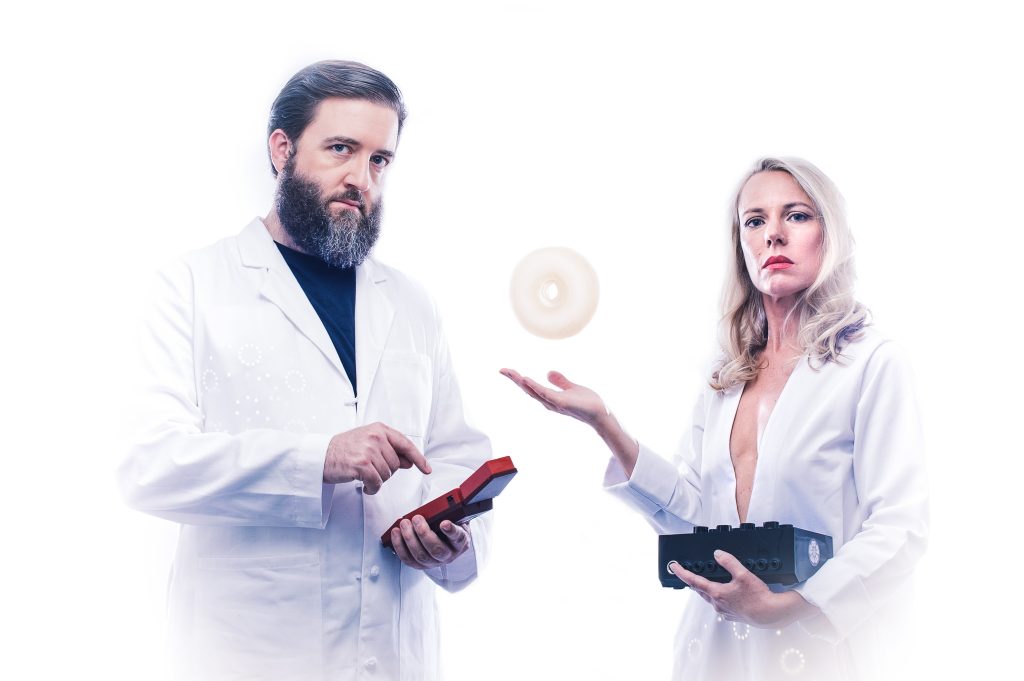 Photon Ecstasy is a performance project that engages music, sound, light, and science fiction to address the hubris of certainty. Created by l’Artiste ordinaire (Melissa Grey & David Morneau), it is a concert-length performance for spoken word, trombone, interactive light and electronics—including the beeps of subverted video game systems, samples from the NASA Audio Collection, and the randomness of the benjolin modular synthesizer. It is based on Dan Rose’s The DNA-Photon Project, an artist book and twenty-five machine-sculptures, which explores the certitude of industrialized capitalist countries, national security secrecy, and corporate overreach.

The performance is an adaptation of the original story about the quest to beam one woman’s DNA into the many worlds of the universe. Further inspiration is drawn from Message From Earth, the record created by NASA for Voyager, which transmits human culture deep into space. Grey & Morneau blur the lines between presentation and performance, fact and fiction, and art and commentary.

Photon Ecstasy was commissioned by the Kislak Center for Special Collections, Rare Books and Manuscripts at the University of Pennsylvania for “Arbitrary Pleasures: Plaisirs Arbitraires,” an exhibition of some never-before-seen artist books from Penn emeritus professor, Dan Rose. Drawing from the tradition of formal constraints Rose’s visual narratives of such topics as the underarm, anthropology, philosophy, sex, motherhood, large corporations, and gender identity take the viewer-reader on journeys into elegant absurdity.

l’Artiste ordinaire will premiere Photon Ecstasy at the Kislak Center for Special Collections, Rare Books and Manuscripts at the University of Pennsylvania on October 20, 2016.

Composer Melissa Grey’s projects include concert works, electroacoustic performances, installations, food and sound events, and frequent collaborations with artists, architectural designers, musicians and composers. Her works have been described as “elegantly diabolical…strikingly eerie and captivating” (furtherfield.org). Recent projects include kinetic scores based on combinatorial memory wheels: blur (after blue hour) for Payton MacDonald’s Sonic Divide project and Volvelle for the Bowers-Fader Duo. She created an electronic soundscape with the modular synth Benjolin to broadcast in the gallery space for the exhibition curated by artist Angela Grauerholz, Michèle Lemieux | The Whole and Its Parts, From drawing to animated films, exhibited at the Centre de design, Université du Québec à Montréal September-November 2016.

Grey teaches Sound Studies at the School of Media Studies at The New School in New York City. She is an Associate Director of Composers Concordance, and a Board Member of Miolina, the violin duo of Lynn Bechtold and Mioi Takeda.

David Morneau is a composer of an entirely undecided genre. Described by Molly Sheridan as a “shining beacon” of inspiration, his diverse work illuminates ideas about our culture, issues concerning creativity, and even the very nature of music itself. His eclectic output has been described variously as “elegantly rendered”, “happily prissy”, “impressive”, “unusual, esoteric, and offbeat”. His chiptune album, Broken Memory, “absolutely wrecks shop.… For that, David Morneau wins.” His current projects include Not Less Than the Good, a secularized morning prayer service based on Henry Thoreau’s Walden, which is being composed for New Thread Quartet (a New York based saxophone ensemble) and will include field recordings made at Walden Pond and read excerpts from Thoreau’s book performed by J.D. McClatchy; and Vintage Machines, a series of pieces utilizing vintage video game systems to make music. Morneau is composer-in-residence with Immigrant Breast Nest, a New York City netlabel.

Robert Kirkbride is Dean of Parsons School of Constructed Environments and Associate Professor of Architecture and Product Design. Dr. Kirkbride has been director of studio ‘patafisico for 25 years, and is also Spokesperson and a founding Trustee for PreservationWorks, a non-profit organization for the adaptive reuse of Kirkbride Plan Hospitals. Robert designed the Morbid Anatomy Museum, in Brooklyn, NY, with collaborator Anthony Cohn, and authored the award-winning multimedia online book, Architecture and Memory, which focuses on two Renaissance memory chambers. Kirkbride has been a visiting scholar at the Canadian Centre for Architecture, and architect-in-residence at the Bogliasco Foundation in Genoa, Italy. At Parsons/The New School, where he recently received the University Distinguished Teaching Award, Dr. Kirkbride established the Giuseppe Zambonini Archive at the Kellen Design Archives, and is an ongoing contributor to Memory Studies. Robert received his Ph.D. in the History and Theory of Architecture from McGill University, and a Master of Architecture and Bachelor of Arts in Design of the Environment from the University of Pennsylvania.

Ezgi Ucar is a New York based sound artist, creative technologist and multimedia designer. She earned her MFA in Design and Technology at Parsons School of Design, soon after her undergraduate studies in Industrial Engineering at Middle East Technical University. Her works revolve around sound experiments, multisensory explorations, physical computing, wearable technology and material research. She exhibited and performed her work at Metropolitan Museum of Art, Circuit Bridges Concert Series, SXSW Interactive, Parsons School of Design, Eyebeam, NYC Media Lab, Numa Paris, and New York Hall of Science. She gave talks about her projects at SXSW Interactive 2016 , Immersive Worlds Conference at Baruch College and Dreamyard Project. She is currently working as a creative technologist at Loomia, where she is also a resident artist.

Gregory M Beson is a designer and craftsman living in New York City. He continues to practice professionally and hone his hand skill while also expanding his perception and knowledge through studies in art, design & philosophy.

Currently Gregory is enrolled in Parsons School of Design Industrial Design MFA Program for which he has received the Presidential Scholarship.

He earned a Bachelor of Sciences degree from The New School University as a member of the Cohort 21 experimental experiential self directed learning program, for which he was awarded an accompanying full scholarship & fellowship.