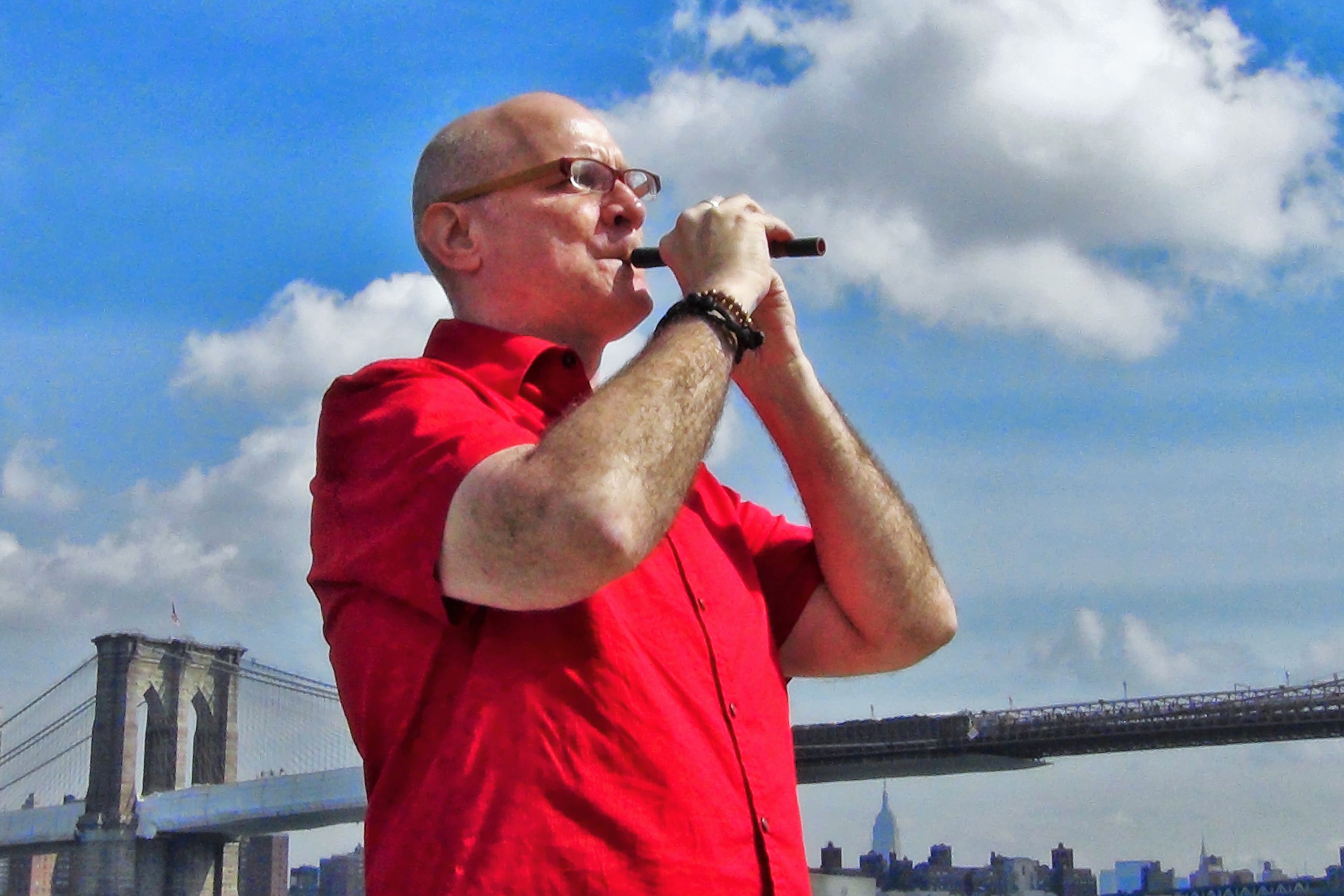 Voices, for hichiriki and electronics
music by Bin Li
performed by Thomas Piercy

Imagined voices, and beloved, too,
of those who died, or of those who are
lost unto us like the dead.

Sometimes in our dreams they speak to us;
sometimes in its thought the mind will hear them.
And with their sound for a moment there return
sounds from the first poetry of our life–
like music, in the night, far off, that fades away.

This piece, in Fuzhounese (the language of my childhood in Fuzhou, China), is dedicated to Thomas Piercy and to all those who fly on planes. – Bin Li

Thomas Piercy is a critically acclaimed musician with orchestral, concerto, solo recital and chamber music appearances throughout the Americas, Europe and Asia. Described by The New York Times as “Brilliant…playing with refinement and flair…evoking a panache in the contemporary works…,” Mr. Piercy presents audiences to varied and exciting concerts of standard classical music, jazz-inspired programs, contemporary works, pieces written specifically for him and his own original arrangements, compositions and collaborations.

A versatile artist defying categorization – performing on the Emmy Award-winning Juno Baby CDs and DVDs; playing the hichiriki and other traditional Japanese instruments in Japan and the U.S.; playing Rhapsody in Blue with pianist Earl Wild; performing concert improvisations with pianist Donal Fox; performing Mozart with mezzo-soprano Frederica von Stade; playing Broadway songs with Raoul Julia; conducting Cabaret or Rodgers & Hammerstein; working with the composer Leonard Bernstein; appearing in a KRS-ONE music video; recording with members of Maroon 5 – as an instrumentalist, singer, director and music director/conductor and actor, he has performed for Broadway and Off-Broadway, television, radio, video and commercial recordings.

Piercy is the artistic director, and clarinetist/hichiriki player of the “Tokyo to New York.” “Tokyo to New York” celebrates the connections between Tokyo and New York City with concerts in Japan, the United States, and Canada. The concerts feature new works composed for Western classical instruments as well as traditional Japanese instruments. They include a wide variety of styles of music, from Japanese avant-garde to contemporary classical, abstract to minimalism, J-pop to jazz-influenced pieces. The composers have ranged from 19 to 94 years of age. They come from all walks of life and experience: from university students to university professors; from self-taught composers to composers with Ph.Ds; from emerging composers to composers that have won such prominent awards as the Takemitsu Prize, Grammy Award, Latin Grammy Award, and the Pulitzer Prize. The musicians of “Tokyo to New York” have had the opportunity to work with many of the Japanese and American composers programmed in these concerts, and since 2012, “Tokyo to New York” has performed over 100 world premiers and numerous Japan and United States Premiers.

Piercy’s many festival appearances have included a featured performance in memory of Leon Russianoff at the 1991 International ClarinetFest, a concert of contemporary American music at the 2005 ClarinetFest in Tokyo, Japan, and an all-Piazzolla concert at the 2007 International Clarinet Festival in Vancouver, Canada. He has performed in concerts and festivals in England, France, Germany, the Netherlands, Italy, Belgium, Switzerland, the Czech Republic, Sweden, Denmark, The United States, Canada, Mexico and Japan.

Mr. Piercy has received grants for recordings, commissions, and performances from the Cary Trust (1999-2010), the Scandinavian Foundation, the International Clarinet Association, New York State Council on the Arts (1999-2018), and the New York City Department of Cultural Affairs (1999-2018). A recipient of numerous scholarships, prizes and awards, he studied clarinet, voice and conducting at the Juilliard School, Mannes College of Music, Virginia Commonwealth University and Shenandoah Conservatory. Piercy’s earliest studies were in both voice and clarinet. He began his college education studying clarinet under Dr. Stephen Johnston at Shenandoah Conservatory. He later moved to New York City to study with Gervase De Peyer under scholarship at Mannes College of Music; he continued to study extensively with De Peyer after leaving Mannes. Piercy later studied with and soon became an assistant to the renowned clarinet pedagogue Leon Russianoff; additional clarinet studies were undertaken with Kalmen Opperman. He has had arrangements and transcriptions published by Boosey & Hawkes, and as an assistant to Kalmen Opperman, he has contributed to clarinet study books and clarinet compositions published by Carl Fischer, Inc., and Baron Publishing. In demand as a clarinet, sax and voice teacher, many of Piercy’s students have gone on to schools and careers in music. Piercy has studied with the hichiriki in Japan with the renowned hichiriki perform Hitomi Nakamura.

A frequent performer of new music, Mr. Piercy has premiered over 200 works composed for him. Ned Rorem, a Pulitzer Prize winner and Grammy Award-winning composer, wrote his only clarinet and piano piece, “Four Colors,” for Mr. Piercy. The work had its premier at an 80th birthday concert celebration for Mr. Rorem at Carnegie Hall in the fall of 2003. A short list of the composers he has worked with and premiered their works (many of them written for him) include Milton Babbit, Allan Blank, Ed Bland, Wendy Mae Chambers, Elisenda Fabrégas, Donal Fox, Daron Hagen, Nicolas Gilbert, Masatora Goya, Jennifer Higdon , Benjamin Lees, Yuichi Matsumoto, Jun Nagao, Takeshi Ogawa, Sergey Oskolkov, Robert Xavier Rodriguez, Erin Rogers, Ned Rorem, Marjorie Rusche, Hifumi Shimoyama, Olav Anton Thommessen, Shoichi Yabuta, and many others.

Piercy’s discography includes “Gotham Ensemble Plays Ned Rorem”, a CD of chamber music featuring the clarinet (released by Albany Records), “CAFE”, a CD of music for clarinet and guitar (released by Tonada Records), the world-premier recording of Sir Richard Rodney Bennett’s “Ballad in Memory of Shirley Horn” and the Emmy Award winning CDs and DVDs “Juno Baby.” He can also be heard on commercials, film and theater recordings. He has recorded for the Albany, Capstone, DGI, Changing Tones, NJST, and Tonada Records labels. More Information at www.thomaspiercy.com

Bin Li (b. Fuzhou, China) is a composer and artist based in New York City. As a member of Wandelweiser, his recent work explores the immateriality of sound and its derivatives. His open scores have been realized in Klangraum (Düsseldorf), Inner Field (Brooklyn), Gänsemarkt (Hamburg), A Place to Listen (Canada), Score Follower and The Unseen Festival (Denver).

Bin’s mentors included Antoine Beuger, Stefano Gervasoni, Mark Andre and Pierluigi Billone. He has participated in IRCAM Manifeste (2018) and holds degrees from both the Jacobs School of Music and the Kelley School of Business at Indiana University (2012). More information: www.bindavidli.com

l’Artiste ordinaire is a collaboration between Melissa Grey & David Morneau. We create sound in performance.