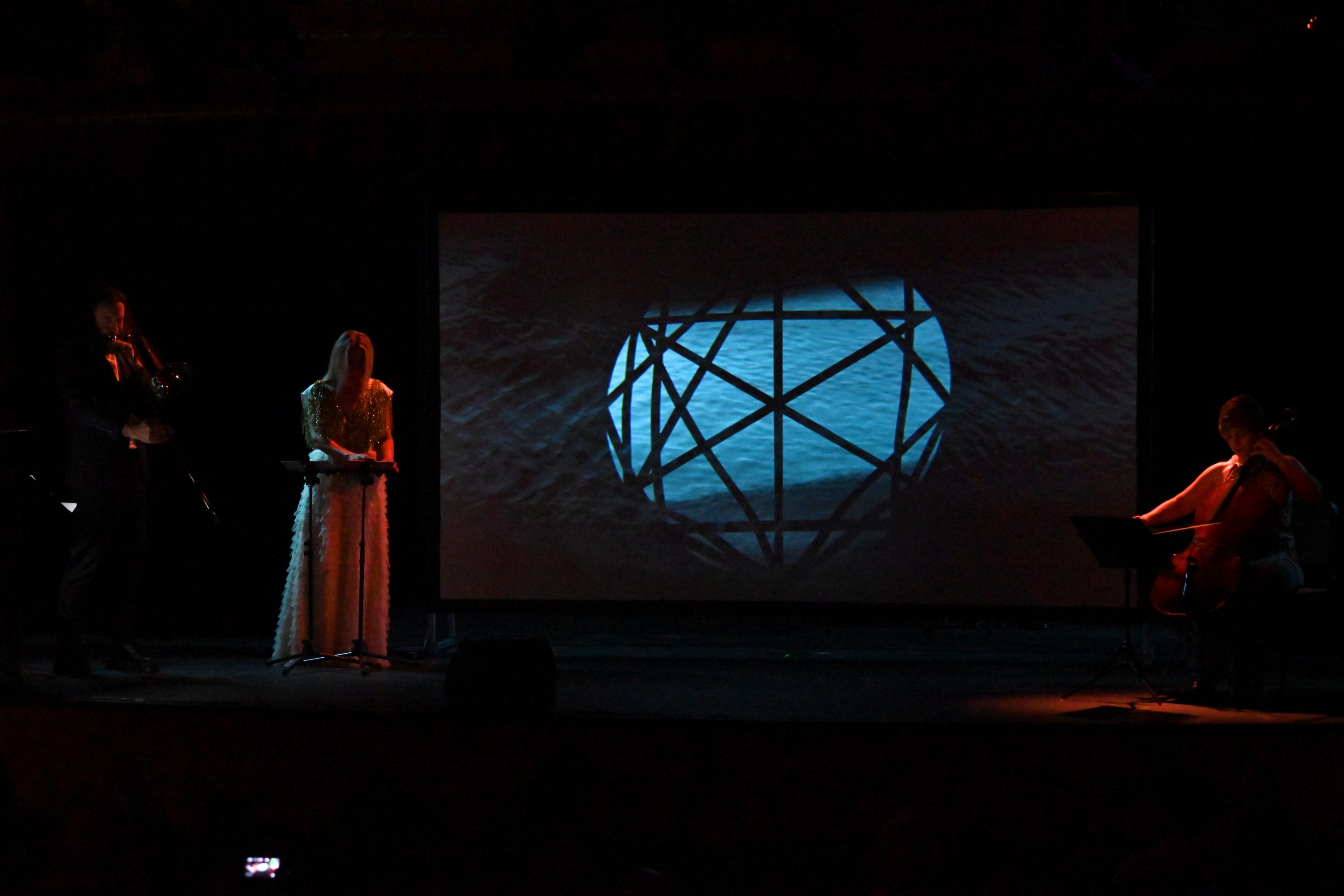 Listen to the world premiere of mem mer mère.

mem mer mère is the confluence of two independent streams: one flowing from l’Artiste ordinaire’s MOTHER project and the other flowing from Kate Dillingham’s cello practice. We met Kate following a concert we produced in 2018. During the course of our conversation, we discovered that we were each pursuing projects that would reconfigure material from Claude Debussy’s La Mer. This synchronicity could not be ignored. Soon after, we invited Kate into our workspace at a later date to continue this conversation over a leisurely dinner. Streams merged. mem mer mère was born.

A bit upstream, in 2017, we were discussing our next grand-scale project: a catalog of productions titled MOTHER—Mother Ocean (mer mère), Mother Earth, Mother Nature. The source and sustainer of life, the ocean has a beauty and majesty long celebrated by artists and poets and musicians. She has also been abused and mistreated, deep wounds concealed beneath a glimmering surface. We wanted to interweave celebration and advocacy in a deeply conceptual way. We began to sketch a production that would interrogate music from various sources, such as Debussy’s La Mer, with additional sounds generated by sonifying scientific data from watery environments.

The driving questions became: How do we create art responsibly in the face of climate change and ecosystem collapse? Is it possible for art to advocate without devolving into propaganda? Is it enough to make art in the pursuit of awareness? In Sea Change: A Message of the Oceans, Sylvia Earle names ignorance as the “single most frightening and dangerous threat to the health of the oceans.” Without understanding the connection between the “health of coral reefs and our own health,” between the “fate of whales and the future of humankind” we cannot begin to solve the problems that face our planet intelligently. She suggests that “with knowing will come caring, and with caring, an impetus toward the needed sea change of attitude, one that combines the wisdom of science and sensitivity of art to create an enduring ethic.” [pp 326-27]

l’Artiste ordinaire believes that such a combination of scientific wisdom and artistic sensitivity is achieved only through careful balance and craft. To simply apply scientific veneer—a shallow theme, a disassociated quotation appropriated as a title—is to do disservice to both. mem mer mère uses Debussy’s notes as the vessel to present research by Dr. Robert Diaz & Dr. Rutger Rosenberg about the ocean’s dead zones. We have recorded Dr. Bhawani Venkataraman reading key passages from her essay The True Price of Water as an introduction to the performance of mem mer mère.

We have each grappled with nature in our previous work. Melissa’s SPRAWL: colony (2010) [horn, sirens, double bass and honeybee field recordings] explores the acoustical perception and symbolic communication of the honeybee in the context of Colony Collapse Disorder. Her Abyss (2006) [flute, violin, electronics] celebrates the seemingly impossible lives of the sea worms that cling to the magma vents on the ocean floor. Her Lateral Line: Three Electric Fish (2014) [violin duo, electronics] is a collaboration with biologist Dr. Jan De Weille, who recorded the electrical impulses that travel along the lateral line system which fish use to detect water movement (and which is the evolutionary precursor to the human ear.) David’s Not Less Than the Good (2016) [saxophone quartet, narrator, electronics] sets passages of Henry David Thoreau’s Walden as a secular prayer for enlightenment, incorporating field recordings of Walden pond to evoke the place of Thoreau’s inspiration while subtly highlighting society’s acoustic encroachment upon this once remote locale.

MOTHER is a catalog of productions—some evolving, others poised to begin—that use sound and performance to examine natural phenomena and humanity’s place in the world. Biophonic Beats, the first production in the catalog, draws on acoustic ecology to frame listening as an act of investigation while acknowledging humanity’s destruction of ecosystems. It is both a structurally improvised music performance and a participatory workshop. The parallel development of performance and outreach is a core element of MOTHER, and one way of creating the combination of art and science that Earle describes hopefully. mem mer mère is spawning the creation of multiple companion workshops, including Swim in Sound for pre-k students. In addition to Biophonic Beats and mem mer mère, planned productions already in development include: Ghost Net—a noise performance about plastic pollution and Shiny Object—an opera about the exploitation of sun-glitter by consumerism. 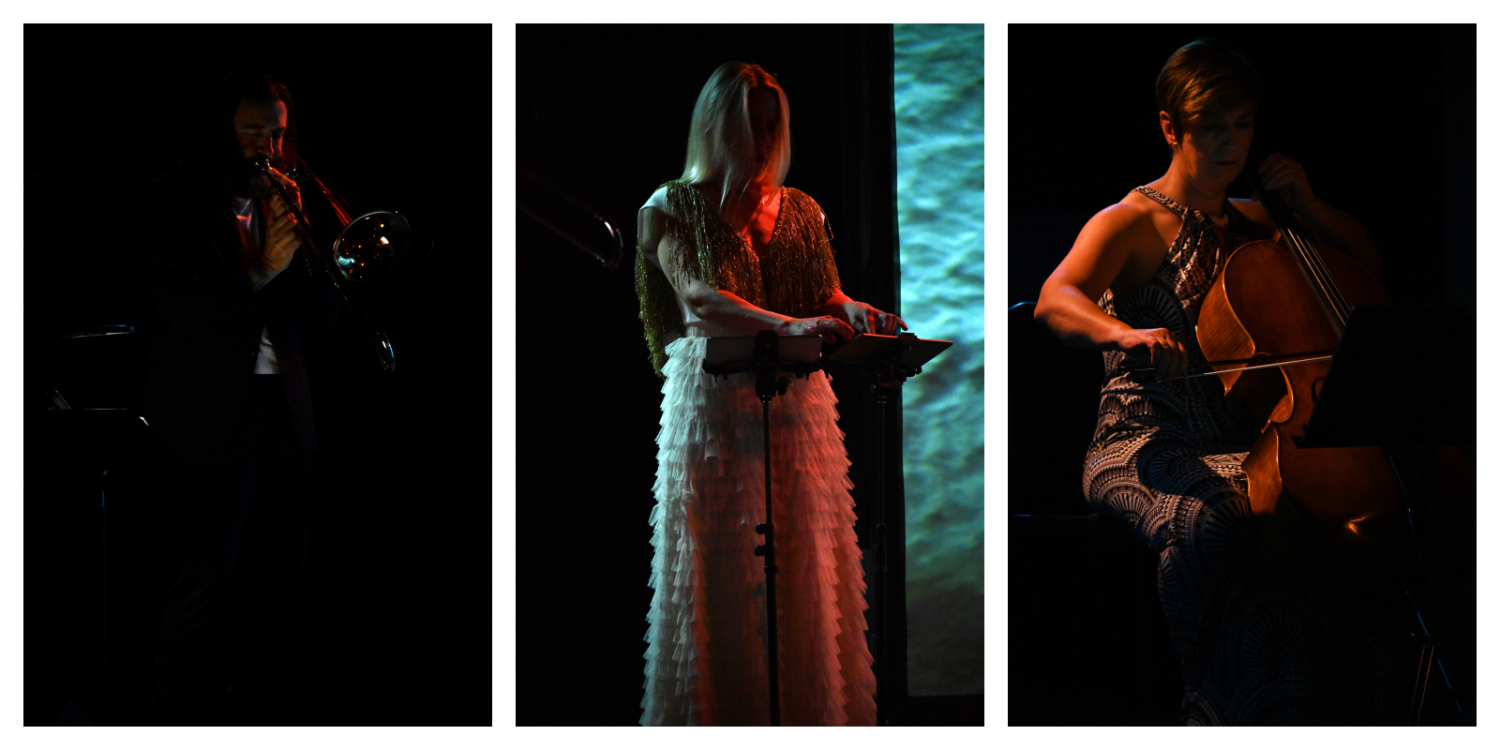 For Kate, the headwaters flow through the eight-measure excerpt from La Mer where a cello quartet rises briefly before being subsumed by the rest of the orchestra. This excerpt is one that cellists study as part of their training, to prepare for auditions and deepening their understanding of their instrument and its literature. These measures are fleeting in La Mer and, because they are scored as a quartet, impossible for a single cellist to play alone. In the course of her study, Kate began to imagine this excerpt as a stain-glassed window that if broken into pieces could then be reassembled in new ways in order to hear all of the interrelationships and complex harmonies that Debussy composed. She looked for a composer with whom to collaborate on this sonic vision. When she described this idea and her desire to collaborate to us, we could not ignore this coincidence.

mem mer mère transforms these eight measures of Debussy’s La Mer into one giant slow-motion wave that begins deep in the ocean’s trenches and rises through the Abyss, the Midnight, the Twilight, and finally the Sunlight as it breaks through the brilliant sun glitter on the water’s surface. As Kate’s cello and David’s trombone incant the sea using fragments of La Mer, Melissa—like Salacia in her realm—interweaves them through layers of shimmering live sound processing that conjure the ocean. The music is accompanied by video of the ocean’s surface, processed in real time by Marc Fiaux. The goal of mem mer mère is to immerse fellow listeners in Debussy’s otherwise fleeting cello moment. Written more than a hundred years ago, this section of music has inspired us to create a sonic experience that invites the audience to dive deep under the waves and emerge, blinking, into the sunlight.

From the beginning it was clear to all of us that our treatment of Debussy’s excerpt would result in layers of sound that are metaphorically like the ocean herself. Rather than approach this metaphor in any literal or narrative way, we pulled conceptually from the ways she moves: the stochastic ripples and undulations on the surface that fail to conceal the movements of her tides and currents. We also considered the ways that Debussy invoked the ocean with harmonies and figurations. His use of structure and proportion (inspired by Hokusai’s The Great Wave off Kanagawa) became the model for our own form and proportions. As much as mem mer mère is about Debussy, it is also an elegiac portrait of the ocean.

Our dependence on the ocean as source and sustainer of life is woven through all human culture in our shared reverence of water. Water goddesses are associated with fertility. The fountain of youth was the impetus for exploration. Immersion in water is a symbol of spiritual birth, a ritual metaphor for birth as the emergence from the amniotic ocean of the womb. Even our Western alphabet contains a reminder of the sea: the letter ‘m’ comes to us from the ancient Phonecian alphabet. The original glyph was drawn to associate its sound with the word mem in which it appeared. Mem was their word for water. ‘M’ is a drawing of ocean waves.

Our ancestors understood that their very survival depended on the ocean and treated her with appropriate reverence. Today, we are less reverent, less grateful. Our collective neglect and wanton exploitation have wrought untold damage to the ocean. We do not know the extent, and we do not yet fully know the consequences for our planet and our lives.

One example: human pollution adds significant levels of nitrogen and phosphorus to coastal waters. These are the combined results of agricultural and industrial runoff, insufficiently treated waste-water, and acid rain that pulls pollutants out of the air (automotive and industrial). The mass accumulation of these nutrients in the water (called eutrophication) can result in diminished levels of dissolved oxygen. Water becomes hypoxic, creating dead zones. Some of these zones last only a few days each year when the water warms, others persist for many months. Dead zones disrupt the migration and spawning of fish, result in mass mortality of sea creatures, and cost countless of millions of dollars in lost fishing and tourism income. Each decade since the 1960s has seen a doubling of the number of dead zones in the world’s waters. Research by Dr. Robert Diaz (Professor Emeritus, Virginia Institute of Marine Science) and Dr. Rutger Rosenberg (Professor, Department of Marine Ecology, University of Gothenburg) has compiled a list of known dead zones. We are underscoring the music of mem mer mère with a roll call reading of these locations.

Countless people make an annual pilgrimage to the water (the ocean, or the lake, or the river) to commune with the mysterious and powerful source of life. As we stand on the shore, our eyes are blinded by the sun glitter that dances on the water’s surface. This reflected light is deeply embedded in our human psyche: we are attracted to glittering light because it reminds us of light dancing on the ocean’s surface. Like the vivid scent of briny seaside air preceding the first swim of summer, mem mer mère incants a reminder of our origins in the ancient sea. 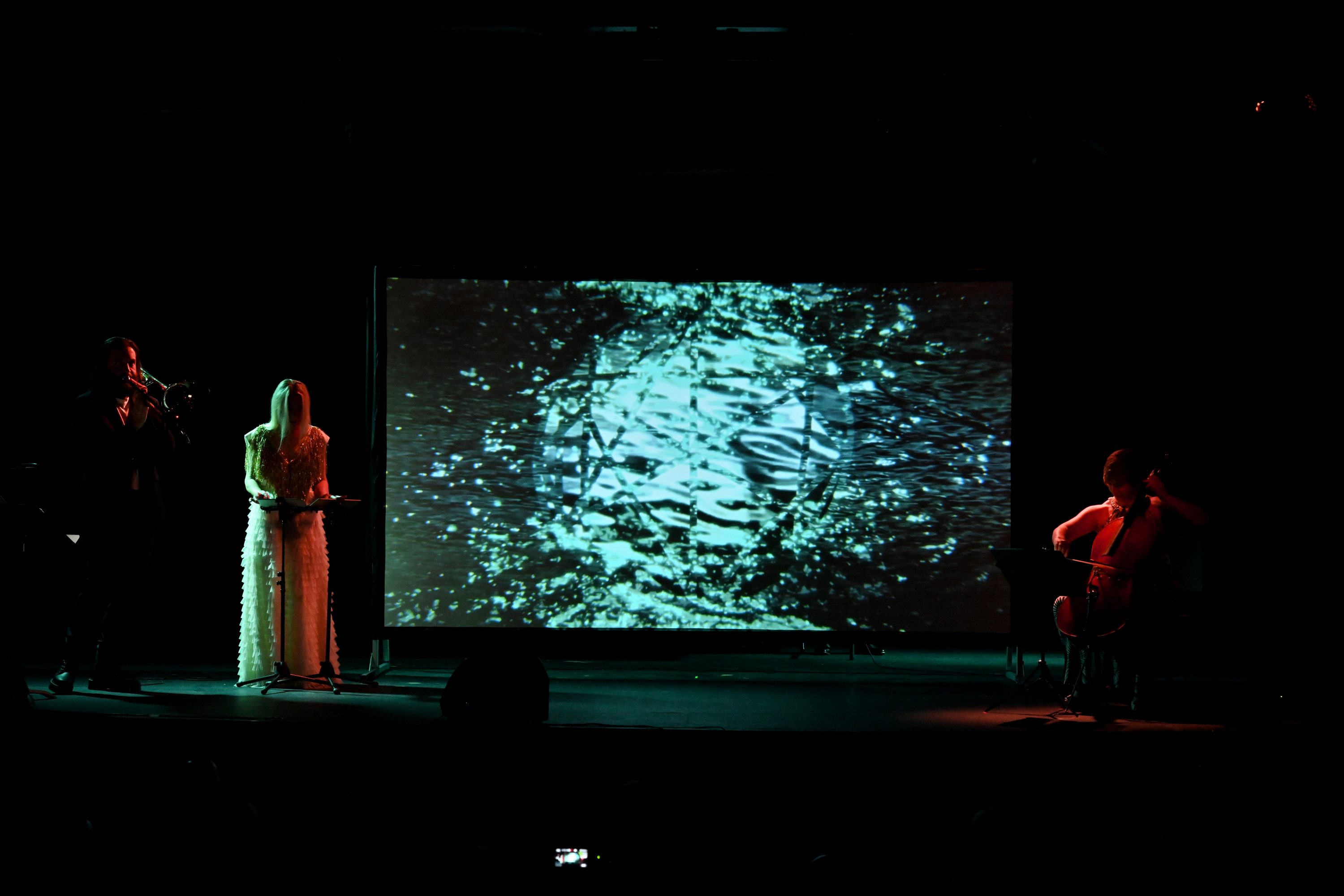